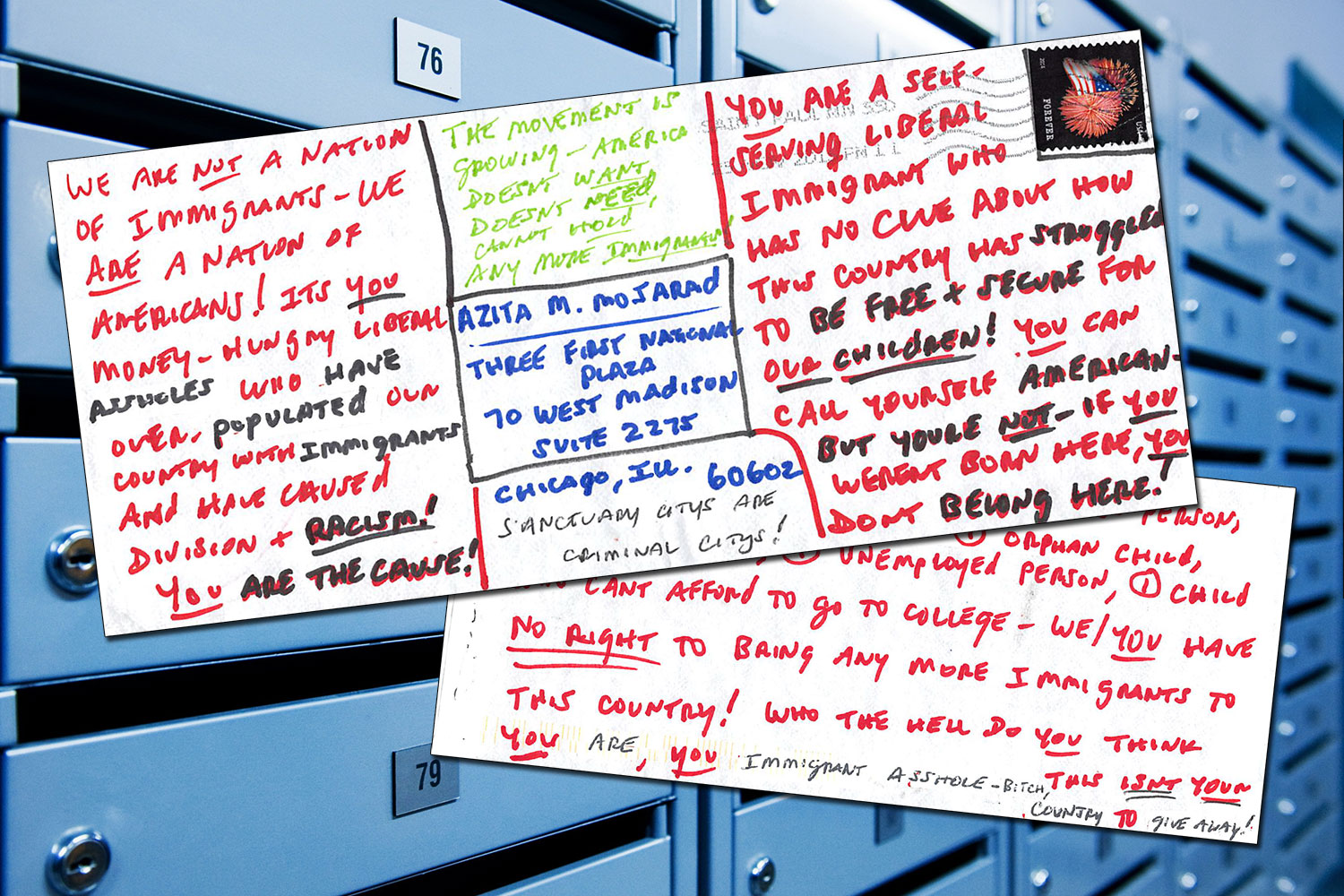 Quite unexpectedly, our Chicago immigration law firm received a rather interesting piece of mail. It is directed to me and seems to serve as a political statement possibly in response to our blog posts concerning refugees – or simply because I am an immigration lawyer.

There’s no letter within, only curious micro-arguments written on both sides of the envelope. Here’s a picture of the front then we’ll go over what’s said below.

As you can see they took their time, writing in different colors and accentuating/punctuating certain words and phrases.

“We are NOT a nation of immigrants – We ARE a nation of Americans! It’s money-hungry liberal assholes who have overpopulated our country with immigrants and have caused division & racism! You are the cause!”

Many political commentators are echoing these sentiments as this issue shapes up to take center stage during the 2016 presidential debate. True, we are a nation of Americans but immigration has always been a defining characteristic of America…from literally Day 1.

There have been two great waves, the first in the 20’s which was primarily Europeans, then the second more recently with the great “Mexican” wave in response to conditions in their home countries.

That said…recent data shows South Americans are actually beginning to leave America due to tighter border controls/more bureaucracy and a heavily weakened economy. Since 2010, more Mexicans are leaving than coming in with family reunification cited as the #1 reason according to PEW Hispanic research.

“You are a self-serving liberal immigrant who has no clue about how this country has struggled to be Free & Secure for our children! You can call yourself American, but you’re not. If you weren’t born here, you don’t belong here!”

According to the U.S. Census Bureau the Foreign Born population in America right now is about 40 million, or 13% of the total population (not an obscene rise from 4.7% over the last 45 years). Half of these individuals are from South American countries and reside in four states: CA, NY, TX, and FL. This letter didn’t come from any of those states.

That being said, I do not dispute that there is definitely something going on economically. The Bureau of Labor Statistics recently released some employment numbers and as ZeroHedge points out:

“Here is why we are confident this particular data should have been prominently noted by all experts when dissecting yesterday’s job report: according to the BLS’ Household Survey, while 375,000 foreign-born workers found jobs in November, a whopping 326,000 native-born Americans lost theirs.”

It’s easy to see why anger is growing among native born Americans. Just look at this graph that clearly shows there’s a huge transfer of wealth taking place. 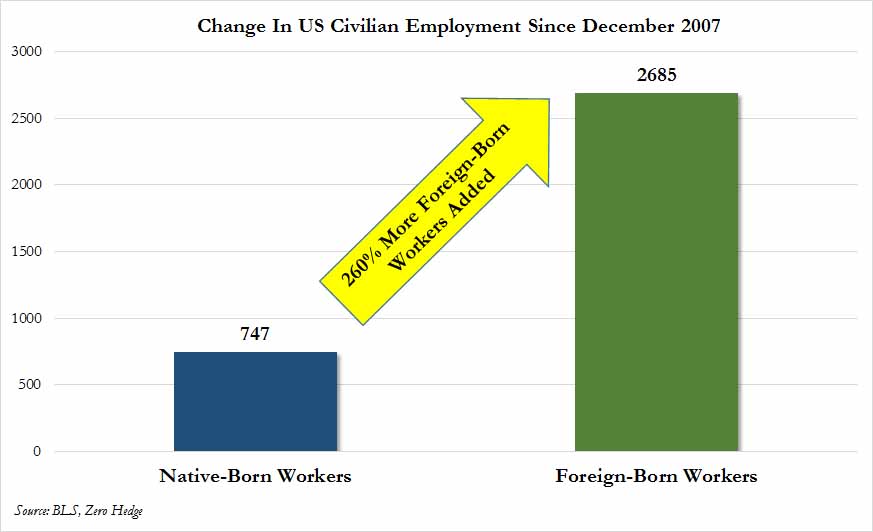 What’s going on here? That’s serious. No one can deny that, but let’s not start hurling the blame on immigrants. We’ve been representing immigrants and their families for about 16 years now and these people are typically not well-connected, and in general are not pulling political and policy strings that are causing this transfer of wealth. They aren’t to blame.

To be frank, this is frightening because it’s true. This anti-immigration “let’s close down American society” thinking is picking up steam.

If left unchecked it could very easily lead to monstrous forms of nationalism. To say nothing of fomenting racial tensions which are already reaching a breaking point…and for what? For who?

Who is benefitting from this transfer of wealth on two playing fields?

“As long as we have: Homeless, Orphans, Hungry Children, Unemployed, and Children who cannot afford college, we/you have No Right to bring anymore immigrants to this country! Who the hell do you think you are, you immigrant asshole-bitch. This isn’t your country to give away.”

Amen. This is an idealism shared by most logical people. Everyone wants world peace, absolutely fair and equal distribution of wealth and resources, no homelessness, and affordable education. Absolutely!

That’s exactly what immigrants are typically after too. They’re coming from places in bad shape, looking for a better future for themselves and their families. Hatred isn’t going to help get us there.

We’re all one human family. And if we’re talking idealisms, wouldn’t it be interesting to live in a world without borders?